British model Matt Woodhouse is one of those rare male models who is sexier than the rest simply because he’s not so far up his own ass [which you can see after the jump], so there is something unASSuming and therefore sexier about the way he looks into the lens.
He just has one of those faces that you know your mum wouldn’t disagree with [hands off mum] and his body is fit without being insanely jacked to the point where their torso starts to look like it’s grimacing at you [which it is]. 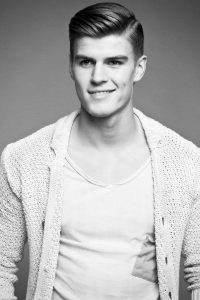